Welcome to the pioneer of WEB technologies and TYPO3 CMS.

If you ask this question "What is SEO?", you will find many who are using internet for some of their business or personal interest with the answer " SEO means Search Engine Optimization". But, what everyone may not be aware is the complex and vast process that works behind it! Here we will try to provide a very basic information on "What is SEO" and how it is so important for your website.

Before we go deep into the topic, we suggest you make a cup of coffee and enjoy this post.

Your coffee seems great! Let's come back to our topic "What is SEO" and see our "Understanding SEO" can provide little information it.

Think about how a human mind works when we want to purchase a A/C, TV, Car, Clothes, grocery items. We even know what brand we are going to buy, but still we have few preferred choice of stores from where we want to buy. Why?

There can be a number of points behind the decision of preferred stores like good & courteous sales persons, very good return policy, latest stocks and many other factors. But, how did we came to know about these stores? What were the sources? In most of the cases, the sources of information are advertisements on TV, advertisements on newspaper, hoardings on street, friends' mouth, Internet and so on. So, we have a variety of sources available from where we get our information to locate these good stores. Let's try to figure out how important it is to spread the information. We will use the following simple example. 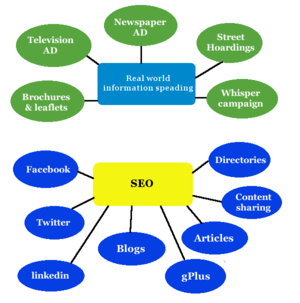 A new store opened last week around the corner where you live. Your experience is good and you spoke to the store manager to share your great experience on his store. You also took little more interest and wanted to know about their promotional plans. Unfortunately, there is no plan from the store management yet to promote this store.

Incidentally, a friend of your calls up next day and ask you to look at a newspaper advertisement on a similar store, which opened near to his place. He also explains what he feels good about the store and why you should also visit it. You also noticed that the store, which your friend just mentioned also put on advertisement on TV.

Now, we have 2 similar stores opening around same time. Both are offering similar quality services, but there is a huge gap on spreading the information between them. The existence of one store is extremely limited to few locals, but the other one is already on news and people are discussing about it. And, it is most likely that this store, which is running advertisements on newspaper, TV will become popular in no time, whereas there is no certainty about the time-period by which the other store may gain popularity. It can also happen that due to lack of customers (revenue), their service quality may fall and ultimately shuts down!

Website SEO process is exactly same, where information is spread out to promote the website. The search engines also need newspaper advertisements, TV advertisements, friends, street hoardings and lastly a good store to collect its information! The primary difference in case of search engines are, the source channels are all virtual and running behind the scene. SEO is about spreading information on every channel available on internet.

Great! we now know that promoting helps. But wait! What if the store that is running advertisements on the newspaper/Television is not good at all and promoting fake information. Then, your friend would definitely not suggest you to visit them and most likely he would have also told about the bad experience he had. Here too, search engine works in similar fashion, if not exact. Only difference is, there is no friend to stop it from visiting. But if it finds that information spread on channels is not matching the actual store, then it consider the information as fake and keeps a note. It will penalize the website for spreading incorrect information and reduce its ranking or even discard it completely.

From the above example, we can outline that SEO is a process of spreading correct information about your website across the internet. The idea behind it is to highlight information as much as possible so, the search engine spiders easily locate them and start visiting the website more often and increase the website rank. We should strictly avoid portraying anything incorrect or something not related to the website else the site may get penalized. But, the most important lesson we learned now is, one must plan for SEO process of his website. Else the website may be left behind isolated in an unknown corner in this super crowded world of internet.

Hope, we now have a bit more idea "What is SEO?" in addition to definition of SEO. Very soon, we will post another article on SEO process, where we will explain about On-page and Off-page SEO. If you like this post, please share it with your friends using the social share links.